STARTED AGAIN! LOL Sitemail me your email address.
Posted by Batboys at 6:13 AM No comments:

After all our past history i thought it fitting to post this site for user to settle there difference. Its just a mock gladiator thing. Its pretty gay, but humorous. Plus it free, so if you need a laugh check it out.

NL POWER RANKINGS
1. New York (36-17) This team appears to be the real deal. With the best era in baseball, one would tend to think that would be the story line hear in the Big Apple. However, offensively they have a trio of Piazza (.325 avg 19 HR 57 rbi), Van Hatten (.336 avg 18 HR 60 rbi), and Garcia (.354 avg 17 HR 54 rbi) that are grabbing all the headlines in the local papers. Their offense ranks 2nd in the NL in runs scored. They hope to lead this team all the way as drichter has built a powerhouse team this season. Denny Young (9-0 2..20) leads the NL's top pitching staff and has been lights out all season. No surprise if you watched him last year.

2. Little Rock (35-18) After a mediocre start the "Cover Boys" of the Munson preseason preview have roared back and are among this years' elite teams. It took a couple of players only meeting after inter-divisional rival Jackson whooped 'em early in the year to right this ship, and they seemed to have done so. Baseball's most productive offense has lived up to the hype and are pounding opposing pitchers scoring over 7 runs per contest. Putting Madison's all time runs in a season in jeopardy. Is this the best offense in Munson history? We will keep an eye out to see. If they can stay healthy I predict they will beat the record. Oh ya, their pitching is much better this season. 3rd best era in the NL.

3. Toronto (34-19) Apparently trading away your big salary players doesn't effect your teams ability to win if you are north of the U.S. border. 3b Phillip Koch (.330 avg 19 HR 45 rbi) has this team contending for another divisional crown. Ace pitcher Vernon Buck is off to a Cy Young type start going 10-1 with an era of 3.23. And closer Tito Hill has collected 14 saves with a 1.62 era. They are in one of the toughest divisions in baseball and will have to count on this pitching staff to lead them back into the playoffs. This father/son tandem ownership may be a wave of the future if their success continues.

4. Cincinnati (33-20) Patience and Power is the motto of this franchise. Original owner buckeye0611 has built a contender here with just that. Now enduring his 5th season at the helm, the rebuild is over and the reloading will get under way. Of their big 3 power hitters only Venafro (.243 avg 16 HR) has disappointed, and has been mentioned in trade rumors recently. Bryant and Martin have made up for their teammates struggles and have combined for 43 homers and 112 rbi's. The pitching has been solid and it looks like 5th year guy Joe Tracy (7-1 3.78 era) has finally come into his own this year. They should battle Toronto all the way this year for supremacy in the North.

5. San Francisco (31-22) The 4 time NL champs are adjusting to their new teammates and should be able to find the chemistry by the all star break and make another run in the playoffs. They still are the Kings of the NL West, and should stay so throughout the year. Catcher Hi Lawton (.307 avg 18 HR 51 rbi) has been the man behind the plate and at the plate for the Gothams. Closer Benny Benitez has not allowed a run in 20 plus innings and has saved all 17 of his save attempts. There is no late game rallies vs him.

6. Jackson (30-23) After a whirlwind start to the season, momentum has settled and this team finds itself searching for a way to keep pace with Little Rock. A 13-14 record at home has been disappointing thus far, but with their pitching staff, they are bound to turn it around. Long Reliever Alvin Roberts has been dynamite going 3-0 with 1 save and a 2.53 era. Controversial FA signee is only 1-2, but has logged 58 plus innings and his era has been an impressive 3.1o. Offensively Harrison has been the only power punch they've had smacking 20 HR this year. But he has had help from Tony Tanner and Harry Diaz as both are hitting over .330. They are in the midst of a slump right now, but should pull themselves out soon and make a playoff push.

7. Pawtucket (26-27) High expectations swirled around this city as the year was ready to get underway. However a slow start has not stopped this team from believing they have what it takes this year. If they can only get over that elusive .500 mark. Every time they get right there, they hit a 3-4 game slide and have to battle back. Whatever parker7x7 is telling underachieving slugger Sam Kingsdale its working as he is hitting .300 and has gone park 15 times while driving in a team high 53 runs. 24 year old Vic Redondo (5-3 3.78 era) has been solid this season to lead the pitching staff.

8. Columbus (28-25) New owner bengals814 aka the "Postal Worker" has not been left with much in the terms of power hitting and may be in the market for one if he hopes to catch his divisional rivals. Malcom Harrison (.341 avg 11 HR 49 rbi) is the team offensive stud and leads his team in all 3 categories. As of this point in the season they have been outscored by their opponents, only by 1, but still must do something if they are gonna make the playoffs. Their 1-2 pitching punch of Lee and Spence has only amounted to a 9-8 record with an era around 3.65. Not enough results for those two guys.

9. Los Angeles (23-30) This team continues to defy the preseason prediction and has made it to dark horse status. Offensively they haven't been great, but 1b Jeff O'Donnell is carrying a .300 avg and has knocked in 37 runs, 2nd on the team only to Richie Foster who has 47 rbi's and 20 homer runs as well. Geoffery Cocoran has been the bright spot on the starting rotation (3-2 3.08 era. The LongBallers are a ways off from being a legitimate threat to the Gothams, but with a trade or two they may make things interesting.

10. If you're 10 plus games under .500 and are getting outscored by a bunch of runs, you don't deserve a spot on the Power Rankings. Sorry. If I had to choose a team it would be San Diego, at least they're not getting outscored too badly. Best of luck to those remaining NL teams, maybe you can be the 10 spot next update.
Posted by ccustead at 8:47 AM No comments: 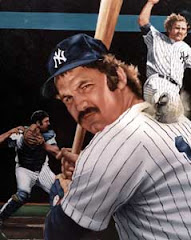